A witch on the roof of a scary old house. Black cats, cobwebs, and a crescent moon - all too creepy! In this point & click adventure, your task is to guide the main character Marilyn as she ventures deeper and deeper into a mysterious house in the middle of the night.

Blackout is a straight forward point & click adventure. Investigate, navigate, and use items to interact with things in your environment.

This is the polished version of the Ludum Dare 48 entry by Carl Lenngren, Erik Schröder, Fredrik Edman, Viktor Holmér and Ulf Malmberg.

Please try the native version if you are experiencing issues.

it sounded like unus annus and i got thrown off:,)

You’re oddly enough not the first to say this, but it’s actually the example text ”lorem ipsum dolor sit amet”.

"imagine spending five nights with this" i love this line.

Amazing game! Good for both beginners and vets of the genre. You definitely have a knack for point and click adventures! Highly encouraged for anyone who grew up with LucasArts or Sierra adventure games.

Clicked on the bookshelf after the lights came on. Goodbye, gameplay. Hello, watching her play the video game for hours expecting it to be intended to end itself. Nope, lol. She'll play as long as I let her. Must be a good game.

Which bit was this at? I didn't see it on my play and kinda want to lol

if you offer the person in the basement some beef jerky thats what they will say.

What an amazing little game!

Cute protagonist and nice plot! Music was surprisingly good too

loved the design, the soundtrack....  such a cool game!!!

Cute little story - I saw a comment that said she hated the way she looks, not a fan of that bit either.

Absolutely enjoyed this game and so did my stream chat!  Thank you ♥

How the fuck do I figure out the fucking vault code? I checked everywhere, but I can't find any clues whatsoever.

The code is randomly generated and is different for each player.

got it that smart

You need to get the crowbar from the basement, then use it to open the cabinet on the desk in the room with the woman in the chair. Inside is a paper with the vault code.

where the fuck is the basement

Crowbar. Get the crowbar and open the drawer on the desk.

I LOVE THE TRASH CAN DIALOG

How funny and sad that no one seems to remember what real pixel-hunting was back in the flash days.  Or that pixel-hunting is a term. (One specific spot, try spending fifteen minutes trying to flip a trashcan, or finding the pixel at the edge of the screen.) This is an excellent game, and quite frankly, there were dozens of these coming out each week, at one point. Really fantastic ode to the genre.

The chesty bounce is a bit extreme, it's a consistent mechanic but no witch who is flying on the regular would lack a control top. Like, please y'all.  Everything else is timed really well, from text to jump-scares.

OH, it's just the misunderstood as the mystery is solved.

Mostly, horror is her hallucination while she’d knocked her head badly.

I had to give this game a try and it didn't disappoint! The puzzles and atmosphere was very clever. Well done!

nevermind i mistook the 1 for a 7 my bad

it looks nice but I got stuck a lot and when I looked at the comments for answers it felt weird? not like "oh! how did I not think of that?" more like "what??? I was supposed to do that???" or "but I already tried that?" and a lot of things were kind of awkward like how you have to click twice for the key to appear, how you had to click on a specific part of the bed, how you have to put the stool on the floor instead of clicking the object, etc. I see a lot of people talking about the twist, but I didn't get there so I don't have an opinion.

the dialog was funny though, great job on that!

Just finished this game! Absolutely loved it! Would love to see some more of these types of games from you.

Extremely difficult for me. Spent a little over 2 hours attempting to play this & most of that was me being stuck. Most items disappear after one use...except one that I've come across (unless it actually has a use more than 2 times, which was my first time being stuck).

The stool doesn't interact with items it needs to, only the floor below it. Since I have no idea if this item permanently disappears after it's fully used up, I have no idea if I'm done with it after 2 uses. I've walked entire floors just trying to place the stool on every inch.

I don't want spoilers or even hints outside of the game/in comments. I just want some sort of direction put in. Some of these just don't make sense. (I'm going to be careful here as to not spoil) Can't peel tape off? Can't burn tape off with a lighter? Fire doesn't scare someone? Nor a stool? Or golf clubs? Monsters like beef jerky? I can't make sense of anything when attempting to solve these puzzles because previous ones just make no sense.

Very charming game, reminds me of old point-and-click adventures. The soundtrack is also amazing and I love how you did the credits. Recommended!

Very fun game! Hope to play more of your games in future :D

how do you get the nicotine ???

The nicotine are cigarettes. They are under the sheets of the bed in the first room that you enter at the beginning of the game.

thank you so much

I laughed, I screamed, overall a great game. I got a little stuck but I think it's the right amount of difficult for a short game

I admit I got pretty stuck at a couple of points - but other than that it was fun!

how do you get the nicotine, unlock the bathroom, and the thing to scare off the spider lady in the basement

I got the nicotine and unlocked the bathroom. Now I want to know what to do with the old key and note

This is a nice game.

This is so cool plzz make more games like this !

Fun game, a good mix of humor and spookitude

Good game but the note with the code is an issue. Certain numbers are not distinct enough from eachother. Could be very frustrating for some. 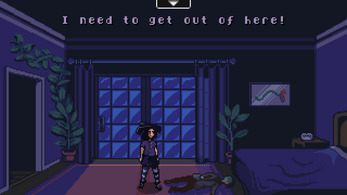 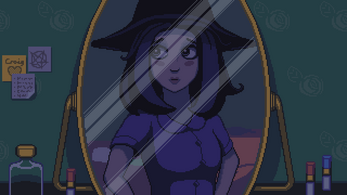 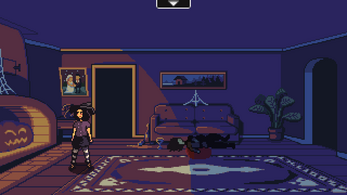 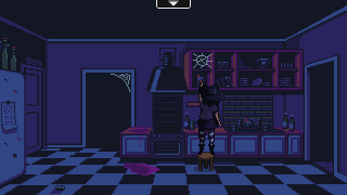